Music is my religion.

In order to change the world, you have to get your head together first.Вариант: Чтобы изменить мир, ты должен для начала навести порядок в своей голове. 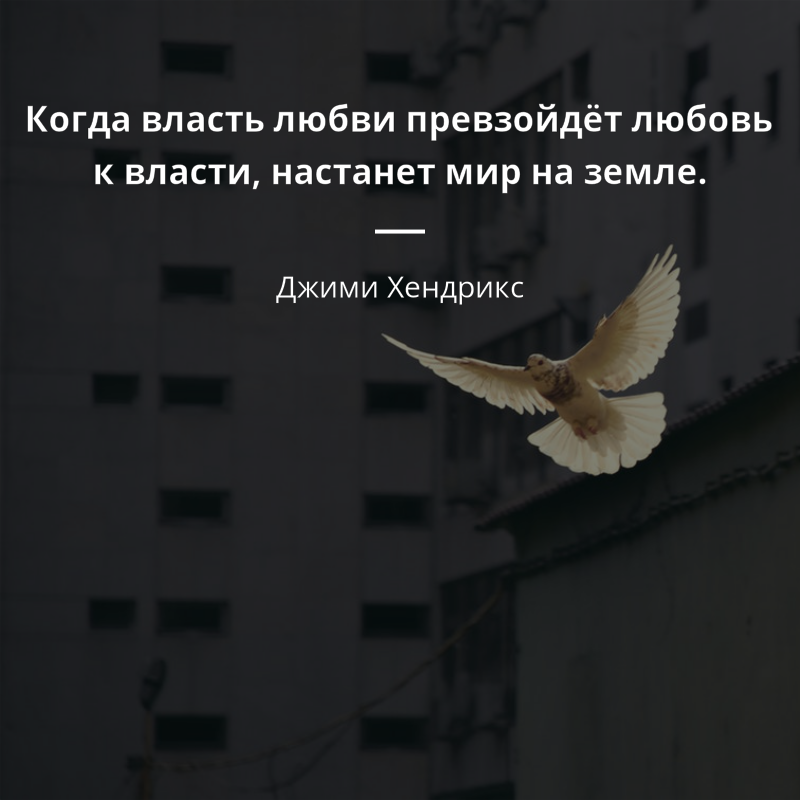 Music doesn't lie. If there is something to be changed in this world, then it can only happen through music.Вариант: Музыка не врёт. Если в этом мире что-нибудь и изменится, то только благодаря музыке.

Even Castles made of sand, fall into the sea, eventually.

All I'm gonna do is just go on and do what I feel.

My goal is to be one with the music. I just dedicate my whole life to this art.

If I'm free, it's because I'm always running.

„Music is a safe kind of high.“

„The story of life is quicker than the wink of an eye, the story of love is hello and goodbye… until we meet again“

„When the power of love overcomes love of power the world will know peace.“

This quote has been attributed to Hendrix on the internet, and is flatly denied to have ever been said by him, without presenting any evidence as to why, beyond such unsupported, derisive and denigrative statements such as the author rants about others making in "WHAT HENDRIX NEVER SAID : They Don't Want to Know What He Really Said and Demand a Slacker Fantasy Instead" (22 March 2010) by Michael Fairchild, at rockprophecy.com http://www.rockprophecy.com/hendrix_quotes_hoax.html. Whether or not he ever spoke them, they are very similar to those reportedly of British Prime Minister William Ewart Gladstone, quoted in The Forbes Book of Business Quotations (1997) edited by Edward C. Goodman and Ted Goodman, p. 639: "We look forward to the time when the Power of Love will replace the Love of Power. Then will our world know the blessings of peace." A similar quotation he provides of Sri Chinmoy predates any currently located source of either the Hendrix or Gladstone attributions, yet he accuses Chinmoy of simple plagiarism of Gladstone (or "Gladwell" at one point). From Chinmoy's book My Heart Shall Give A Oneness-Feast (1993) he quotes: "My books, they all have only one message: the heart's Power Of Love must replace the mind's Love Of Power. If I have the Power Of Love, then I shall claim the whole World as my own … World Peace can be achieved when the Power Of Love replaces the Love Of Power." An even earlier statement of Chinmoy is found in Meditations: Food For The Soul (1970): "When the power of love replaces the love of power, man will have a new name: God."DisputedВариант: When the power of love overcomes the love of power, the world will know peace.